Getting Dressed for Halloween!

October 19, 2018
Honestly, Halloween was never my favorite holiday. It was just a day where some people dressed up. I don't particularly care for dressing up, so I haven't since I was a little girl. But... I have two sweet boys now. And one of them LOVES Halloween. So I'm participating in all the costume sewing, fun holiday-themed tee making, and Halloween-themed blog tours, and am actually really enjoying it! 😉

Today is my day to share on the DIY Halloween Costume Blog Tour hosted by Seams Sew Low. 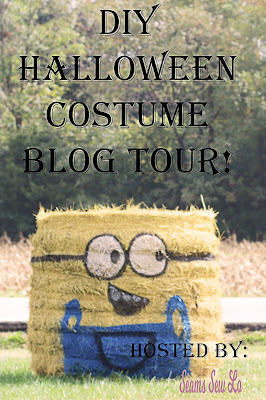 Okay... so I'm actually just sharing some Halloween-Themed tees, but they're so fun! I promise to show a picture of their costumes too!

Daniel loves ghosts, pumpkins, costumes, candy, scary stuff, Halloween Decorations, everything Halloween related. I don't know where he gets it, but he loves the holiday. 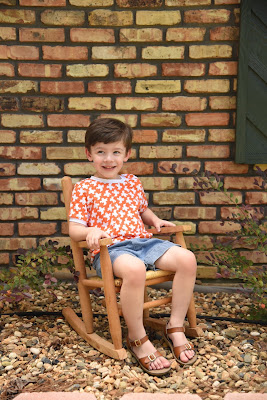 I mentioned that I've made Daniel Halloween Themed shirts in the past, so this year, when I found this ghost fabric and Joann's, I had to get it! It has ghosts (which Daniel loves) and it's orange (which is apparently Luke's favorite color). I can make both boys happy with it! I HAD to make a third one for my little nephew too. 😉 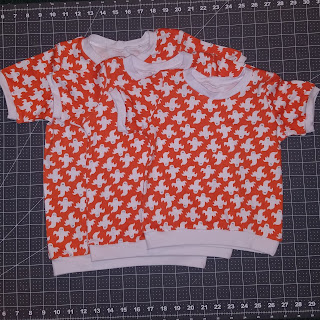 So for their fun Halloween-themed shirts, I used the FREE Brindille and Twig Ringer Tee! I like Brindille and Twig patterns. Most are really easy, relatively fast sews. The Ringer Tee may be the fastest because it has NO HEMS! BANDS EVERYWHERE! Maybe that's why I love it! One evening of sewing = three new little shirts!

I chose to make short sleeve tee shirts because Louisiana weather is SO unpredictable this time of year. It can be hot or it can be cold. I knew that if it was cold, the kids could still wear their ghost tees layered over long sleeves. They've worn them both ways so far this month because we did have a cold front! The pictures of my little guys were made before it got cold!

Daniel cooperated so nicely for his photos in his new tee, and Luke was more interested in playing. 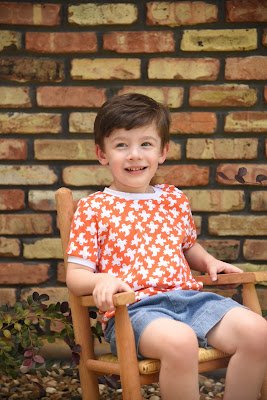 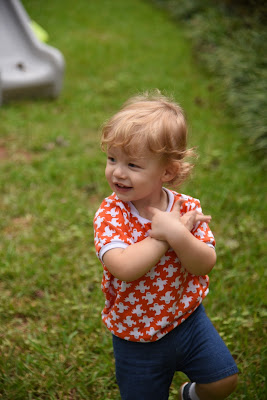 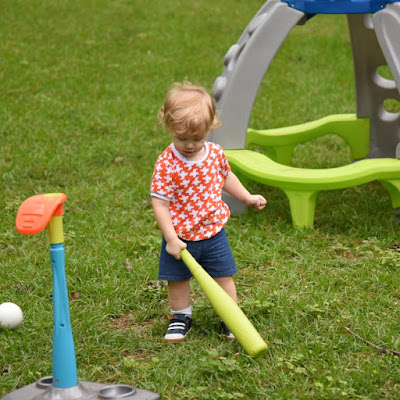 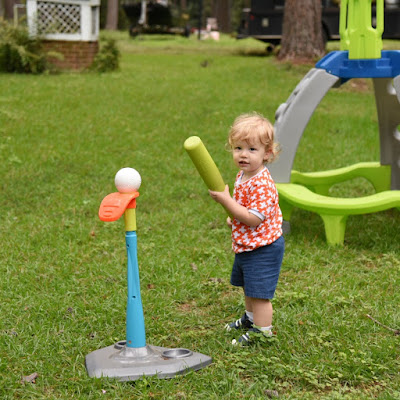 And Look at how cute my little nephew is in his! 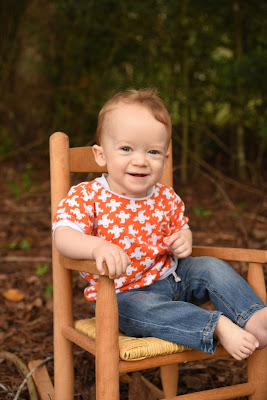 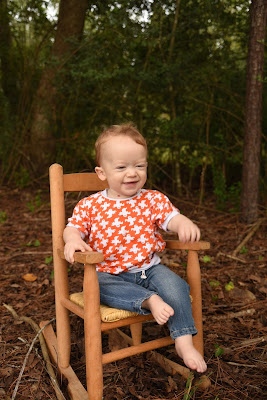 A couple of weeks ago, I participated in a different Halloween themed blog tour and shared their costumes. I had so much fun making them. You should check that post out here to see my versions of Batman and Robin.  If you're interested in seeing their costumes, I'll share a photo here too. 🙂 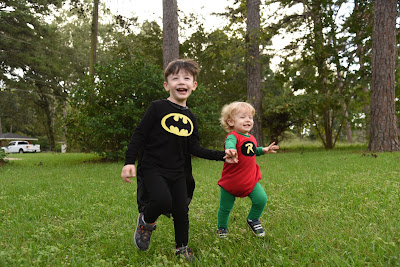 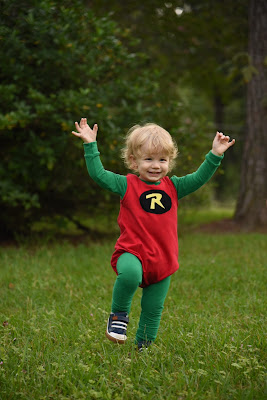 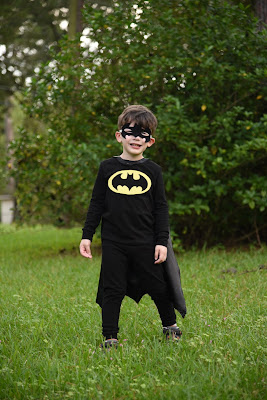 As you can see, we're having lots of fun making costumes and holiday-themed apparel! Thank you for reading my post! 💗 I hope you've found some inspiration!

If you enjoyed reading this, I would love it if you would subscribe to be notified of future posts! 💙

Are you ready to see all of the new Halloween costumes on the DIY Sewing Pattern Blog Tour? Me too!! Go ahead and follow along with us!

Have you downloaded the new Seams Sew Lo Sewing App yet??? It is available on Apple and Android! Find and Rate all of your favorite indie sewing pattern designers and fabric companies. Plus find all of their latest sewing deals! Download the App NOW:

Popular posts from this blog

The Whitney Dress by AK Patterns

May 20, 2020
I love dresses. I have quite a few hanging in my closet. I find them so comfortable, and I also feel pretty when  I wear one. This one is already a favorite for me! This is the Whitney Dress by AK Patterns . When Athina sent her testing group an e-mail about this pattern , I was a little hesitant at first. I absolutely LOVE the style, but I've had such limited sewing time, and the dress looked a bit time consuming at first. I also was a little reluctant to test because this is a knit sewing pattern, and I only have regular interfacing. With the way things are right now, I knew I couldn't get out to get knit interfacing. So, I e-mailed Athina. She told me knit interfacing is suggested, but that my regular interfacing would probably be fine. So... I decided to test, and I'm REALLY glad I did. Putting the Pattern Together:  Truthfully, this pattern took me a while to tape together and cut out. I taped it all together one afternoon. Then that night after the boys went t
Post a Comment
Read more

April 12, 2020
I love sewing for all the holidays. I love making things for the boys for Christmas, Valentine's, St. Patrick's, Easter... Every holiday they get something new. Generally for Christmas and Easter, they'll get two new things - one is their "fun" holiday outfit, and one is dressier for Church. This year has been tough. Somehow I thought that since we're home all the time, I'd have more sewing time. Nope, not the case. I've barely found any sewing time. I love sewing, but the kids have worn me out during the day! I typically do a lot of sewing after they go to bed (at least a few nights a week), but recently, I'm ready to sleep as soon as they are! So... I was VERY last minute this year sewing Easter attire. I looked weeks ago at Joann's to get ideas of fabric for their dressy outfits. I found a beautiful light blue shirting that I planned to go back and get. It was not on sale that day, and I was already using my coupon for something else.
Post a Comment
Read more

December 30, 2018
So, as you may have seen, Sinclair Patterns is running a sale this week! It's the last week of the year, and she has marked everything in her shop 25% off for a boxing day/ End of Year Sale! So generous! I started sewing more for myself in 2018, and discovered a couple of pattern designers that I love using for my clothes... Sinclair is one of them! I've mentioned before that I get a really great fit from her patterns. Every Sinclair pattern I have tried has been on regular rotation. They're all so perfect, and fit my body type wonderfully. So since she is having a sale, I started looking back at photos so that I could share the sale in Facebook Sewing Groups. I noticed how many Sinclair Patterns I've made, so I thought it would be fun to do a 2018 Sinclair Pattern round up to see all of my Sinclair sews in one place! 🙂 So... Here we go! The Betty The Betty was the very first Sinclair pattern I tried, and that's when I fell in LOVE with Sinclair! I actua
Post a Comment
Read more